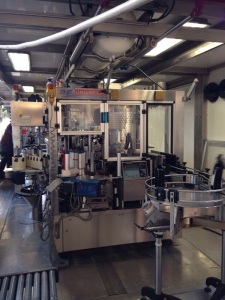 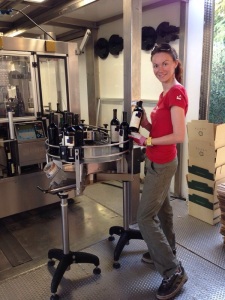 Every june/julyis dedicated to bottling since 2007, when we bottled our Leuta 1,618 Merlot 2005. It takes only a couple of days for Leuta to bottle all their production as we are still very small and it does not take too much time to do the job. Bottling does not only mean putting the wine into bottles, it is a much more complex task.

Basically everything begins in december of the previous calendar year. During the coldest months of the year we leave the wines, that were previously in barrels, in stainless steel tanks to settle and to cool down in order to perform a kind of tartrate stabilization. This is critically important time; in fact refrigerating the wine and letting it get cold naturally allows the formation of crystals of tartaric acid thus avoiding such formation while the wine is in the bottle which, if allowed to happen,  would make the wine less attractive. Even the formation of crystals is not a 100% guarantee that the wine is stable as there could be the presence of colloids that prevents the deposition of crystals and subsequently more tests and treatments would have to be done. Given that Leuta is a “green” producer, we consider this  natural cooling down process sufficient without having to introduce any type of stabilization products into the wines, so occasionally some crystals might be found in our bottles.

Another task that should be performed before bottling is the clarification of the wines. Technically speaking there are many ways in which the wine can be clarified, otherwise known as “fining”. Fining is necessary because wine contains a complex mixture of molecules and particles of many different types and sizes, some are electrostatically charged negative while other positively charged. Fining products that are used in the industry include: – ox blood (which Europe has not permitted since 1987) – egg white – albumin – gelatin – isinglass or ichthyocol – casein – bentonite. At Leuta we do not use any of these, especially the fining agents from animal origin; only bentonite is sometimes used but not always and not with every wine. Bentonite is a form of clay mined in many places of the world, included USA; technically it is an aluminio-silicate clay formed from volcanic ashes whose small particles acquire a negative charge while dispersed in wine thus removing the positively charged protein molecules. Not to repeat myself but again, at Leuta, we have never used and we will never use such substances. The only thing we do to clean the wines is to move them from a tank to tank and allow the small impurities to deposit on the bottom of the tank providing us a clearer product. Before bottling we filter the wine at 3 micron which, in wine industry, is considered a very large filter.

One more task to be completed before bottling is controllong of the correct level of free sulphites – sulphur dioxide SO2 -. SO2 has an importance, even though self-destructive, it provides protective action versus oxygen. In fact when oxygen dissolves in wine, the sulphur dioxide  reacts with the oxygen before it has the chance to oxidize any components of the wine. By doing so the sulphur dioxide is itself destroyed by being converted to sulphuric acid, in a very minute quantity. In order to keep the wine always protected by oxygen further addition have to be made at every stage in the wine making/handling process to keep the SO2 level in the wine appropriate. The law in Europe – (Reg. CE No 606/2009) allow the wine producer to put up to 150 mg/l of sulfites in the red wine; at Leuta we always bottle wines with 45% less sulphites than what is allowed.