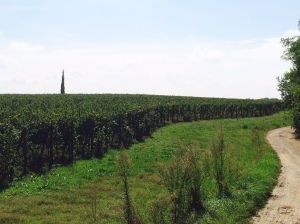 Hello everybody, sorry for having been away for so long. September is harvest time for us and so I was incredibly busy processing the grapes.

2014 has been a very difficult year in Italy. We had a lot of rain in Spring and in early Summer. I was kind of worried all Summer and it was only in August that I finally felt a little bit happier. August was definitely much better, weather-wise, and we did (as always) a significant green harvest leaving on the plants only one bunch for every branch. It is a very useful process, resulting in more concentration in the remaining bunches, and ultimately the ones that will be going into our winemaking process.

Anyway, even though the season recovered a little bit it was a kind of late harvest compared to the previous vintages. We did our picking for Vin Santo in late September and soon after we started to harvest the varieties for the reds. 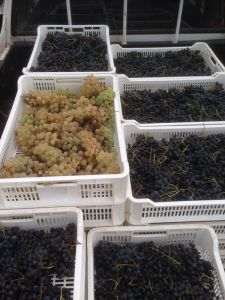 As in our tradition we only bring in the top quality grapes, the rest is normally sold to other wineries or tilled into the soil to make compost.

I can easily say now, after I have processed  all my grapes, that it will be a great year for Cabernet Franc. I am really impressed. Potentially it could be my best Cabernet Franc ever made, so far….. Unfortunately I cannot say the same for Syrah, even getting in only the best bunches, I was badly disappointed by the average quality of the wine that resulted after the fermentation. Of course I could intervene much more intensively in the wine but, as you all know, I do not like to be aggressive in the winemaking process; if the wine is not already in the grapes………. It is very likely I will not make a 100% Syrah in 2014, I am sorry to all of you but Leuta 0,618 Syrah Cortona Doc 2014 will not be made. Regarding Sangiovese and Merlot I am pretty satisfied, it will be another good year!